Our study is based on the analysis of : Comedy Central's format in United States, 5 competitors of CC, the usage of YouTube of generation Z with the support of a variety of tools like : Google trends, Think with Google, VidIQ, Gephi.

Based on our analysis of Comedy Central U.S.'s YouTube channel, we found that the most commonly employed format (and most successful) was the chopping up of Comedy Central TV shows into short video clips no longer than 10 minutes in length. This plays to our target audience well, as Jamil enjoys "short, simple, satirical content easily played on a mobile device. Some of the most popular videos include clips from Drunk History, Key and Peele, Workaholics and the new show Alternatino.
‍
‍

Our team has chosen to measure 'successes' based on number of likes, comments, and shares (LCS) the video receives, as well as number of views overall and views per hour (VPH). The amount of interactions on a video demonstrates the  engagement of the audience, and can lead to virality. A successful video will have a high LCS number, as well as a high VPH score and high number of overall views. A failed video will have low scores in these categories. 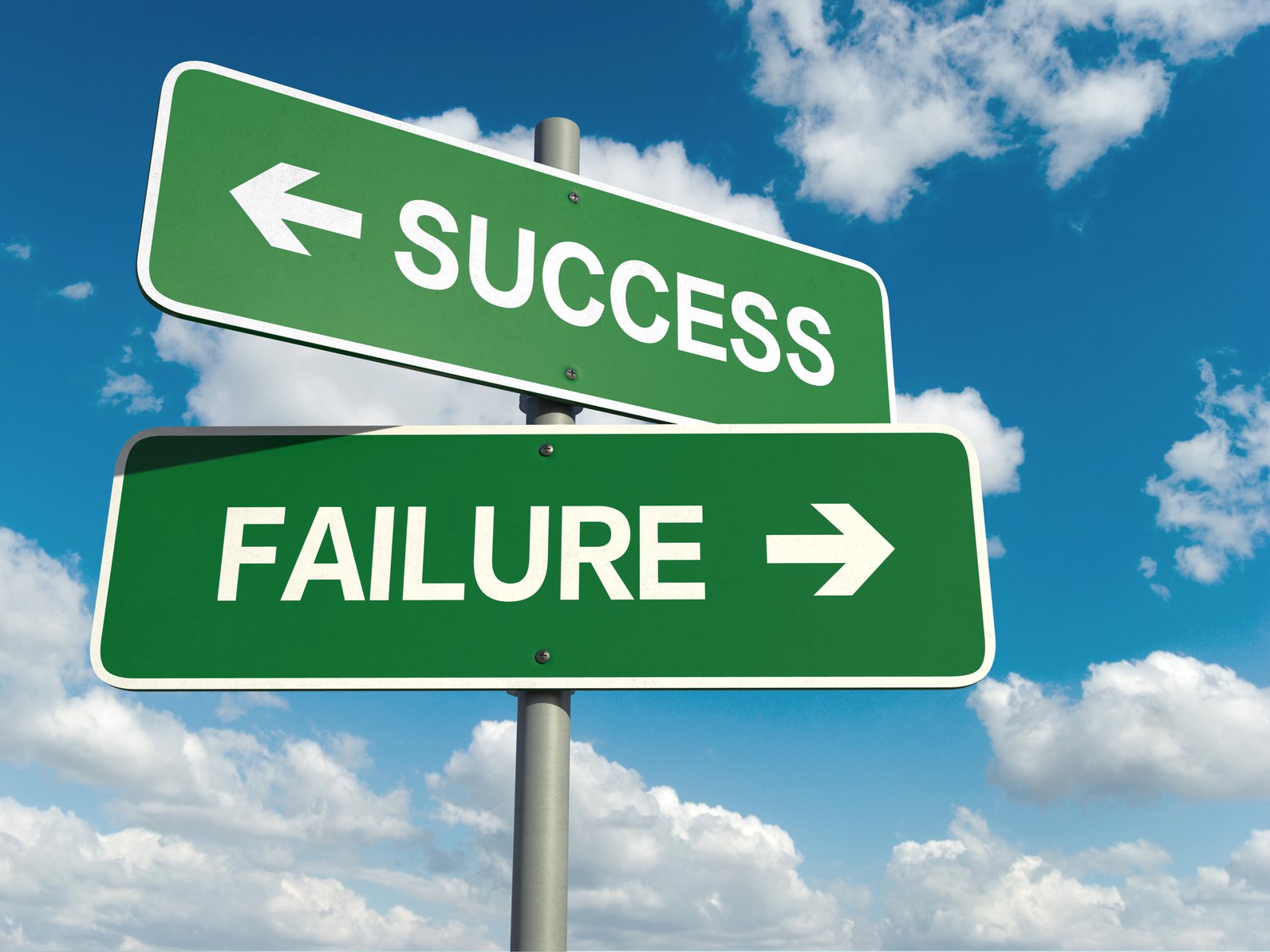 From the data of Google trends, there is a significant amount
of searches for videos of the Comedy Central Roast Specials. Keywords such as “roast” and “ Bruce Willis” appear both as Top and Rising queries. Comedy Central Roast is the name of a special where celebrities are 'roasted' (made fun of) by an assortment of comedians and other stars that airs annually on Comedy Central's American TV network. Last year the celebrity roasted was Bruce Willis, which explains why his name appears in the search queries. 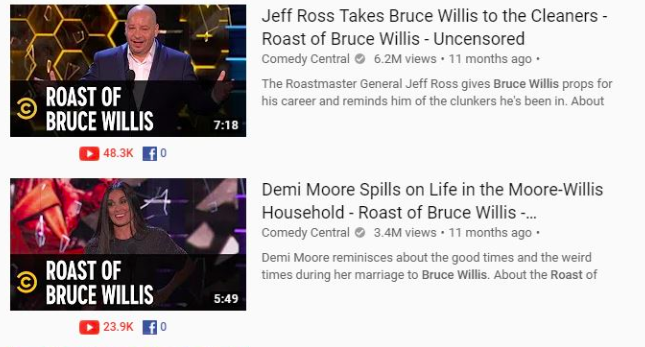 To the left is a screenshot of some of the YouTube videos featuring clips from last year's roast of Bruce Willis. Some of the featured guests invited to roast the action movie star included his ex-wife Demi Moore, celebrity chef Martha Stewart, and comedians such as Dennis Rodman and Nikki Glaser. These videos are highly viewed and are very popular according to data obtained from Google Trends (shown above).

To the left is a screencap of one of the most popular videos on Comedy Central's YouTube channel, Key and Peele's 'Substitute Teacher' sketch. This video shot to virality and saw an incredibly high amount of engagement and views initially. However, the video is 7 years old, and engagement has suffered significantly since then. This is the case for many of Comedy Central's most viewed videos, especially with old Key and Peele videos. We suggest Comedy Central look into ways to reinvigorate this content to re-boost their engagement. 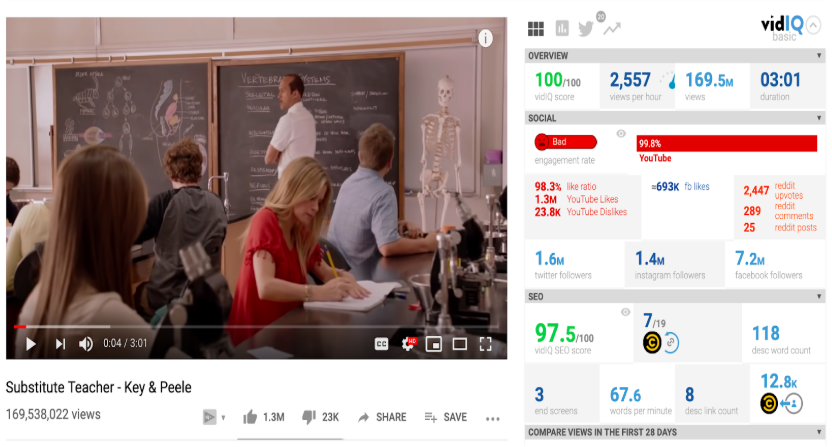 Comedy Central has the highest VidIQ Score and SEO Score compared to it's competitors. However, SMOSH has aproximately double the views per hour compared to CC. This can be attributed to Smosh's larger subscription base.

SMOSH is the main competitor for CC. It's interesting to note that they don't employ monetization via advertising in their videos. According to this data, we can see that the average daily views of CC is really close to Smosh, however Smosh seriously outnumbers all competitors in this regard. We believe this is due to the larger subscription base of Smosh.

We analysed data relative to "Arts & Entertainment" using a Google Trends search, shown on the right. During the past year in United States, Central Comedy was searched at a higher volume on Google than it's competitors. There is a spike for Comedy Central searches in July, and we believe this is related to the annual airing of the Roast special. 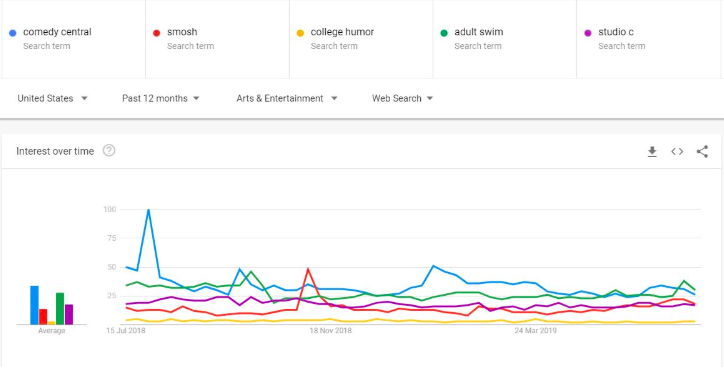 Howerver, in terms of YouTube searches, SMOSH was searched at a substantially higher volume compared to CC and other competitors. This may be related to their higher subscriber base, as well as the fact that Smosh is a channel creating videos specifically for YouTube. Since YouTube is their main platform, people must search them on YouTube in order to engage with their content.

To the right is a word cloud which displays words we pulled from each of our competitive channels' top videos (based on views per hour). It is based on the top keywords present in each video's tags. Some of the most popular tags include "comedy", "google" and "funny". Each channel is also diligent in tagging their respective networks or channel name, which aids in SEO recognization as well as branding. 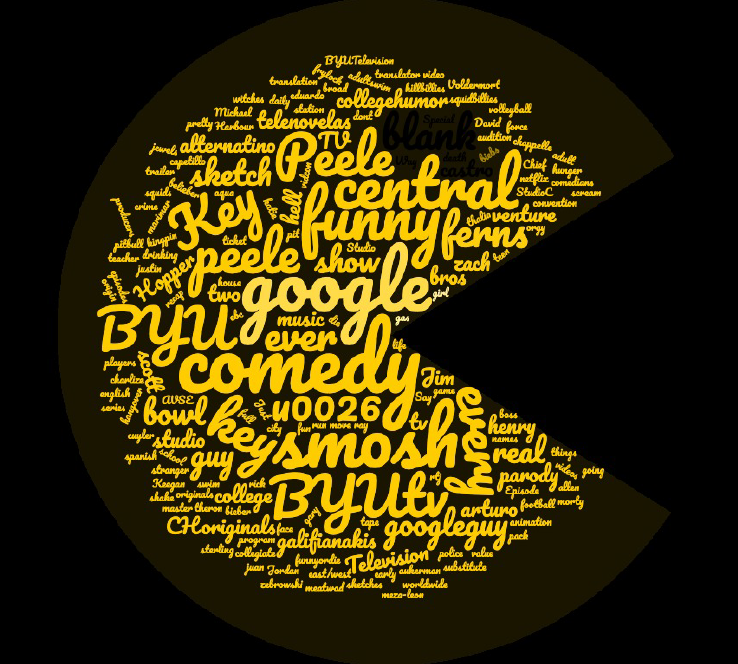 On the right is a data visualization (called a Gephi) of the network of subscriptions on YouTube based around the comedy genre. The Gephi showcases the ties between Comedy Central's channel and other channels on YouTube. The network maps YouTube channels which were pulled from YouTube's API for the search term "comedy central US".

Our unit of analysis was channels, and we did 2 forms of analysis: degree (both ingoing and outgoing) and modularity (an algorithm that colors based on similarity).

The search was generically defined and high volume, and it produced 50 different channels which were croded twice. This means we can see the 50 channels, each channel's subscriptions, and the subscriptions of their subscribers.
Each mode represents a singular channel. The differing colors represent similar communities according to the modularity algorithm. The connections are based on featured channels and subscriptions. As you can see, there is lots of intergration and subscriptions between channels.  Some limitations we encountered were that the search query tool only matched 50 channels that croded them 2 times. 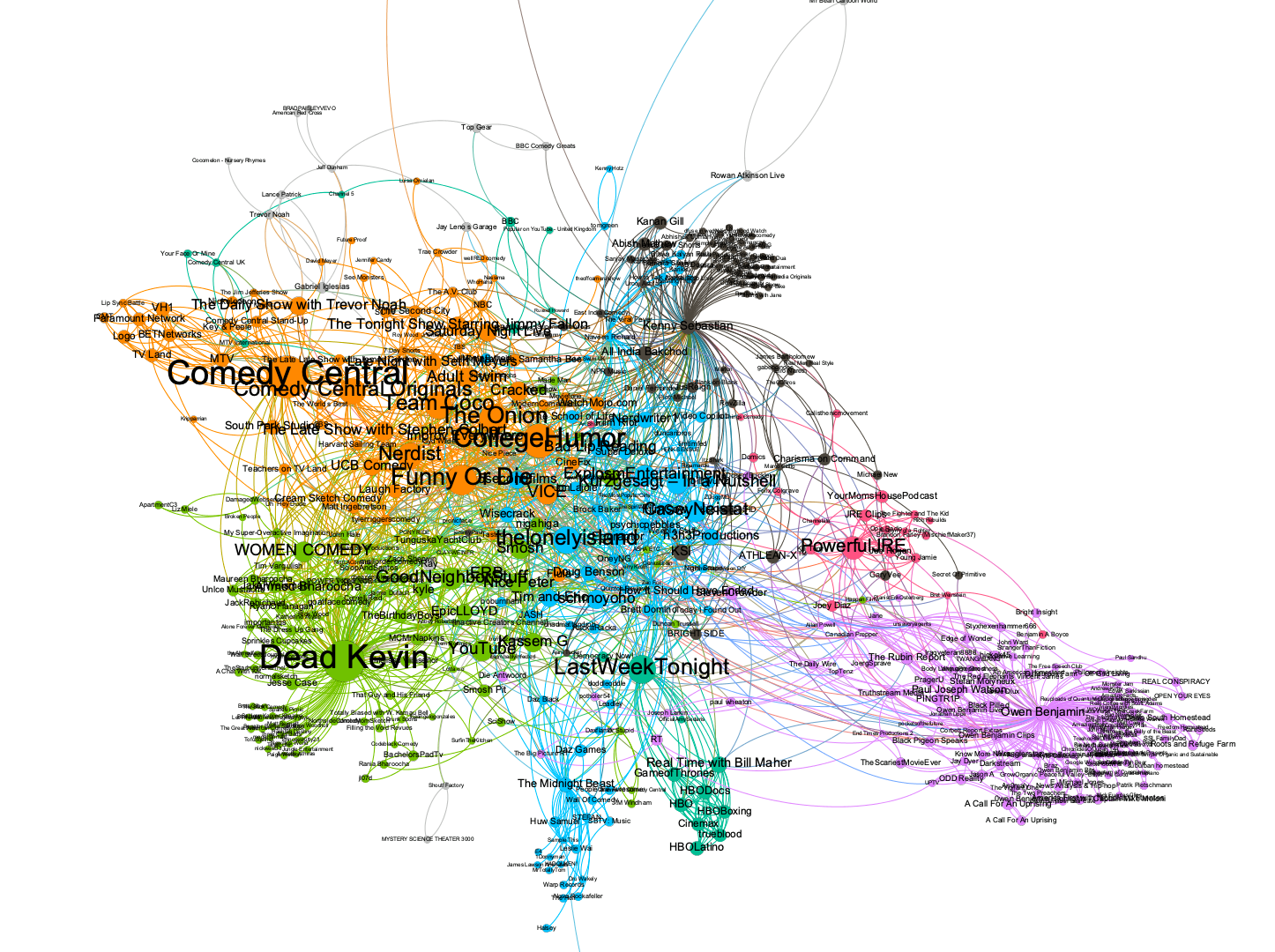 Who is our target audience? 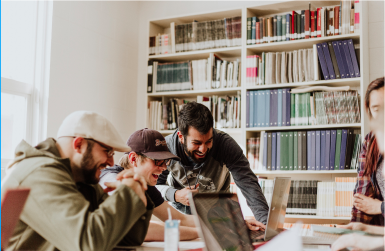 Young connectors make up a vast majority of users engaging with content on social media. They use YouTube to search for information on a variety of topics, including product reviews, tutorials, vlogs, and more. They engage in many different online YouTube communities (as modelled on the gephi graph above), and watch a lot of videos on their mobile devices. They also actively share content with family  and friends either by word of mouth or through various other social media platforms.

Percentage of U.S. internet users who use YouTube as of January 2018, by age group.

More than 96% of U.S. internet users between 18 and 24 years old use YouTube, with 25-34 year olds falling not far behind. As young connectors make up a tremendously large portion of the user portfolio engaging with content on YouTube, it is important that content on YouTube specifically caters to and engages them.
https://www.statista.com/statistics/296227/us-youtube-reach-age-gender/ 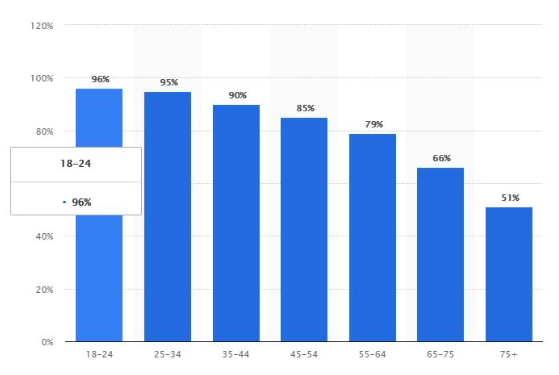 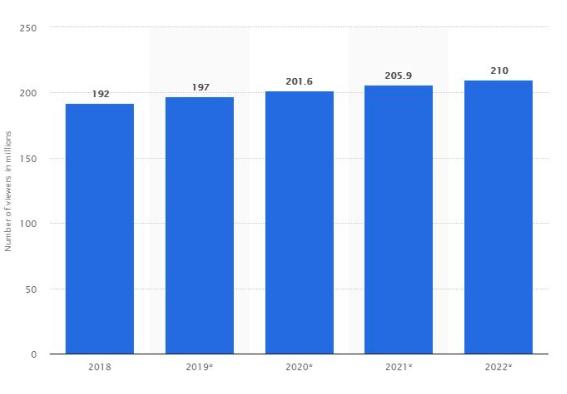 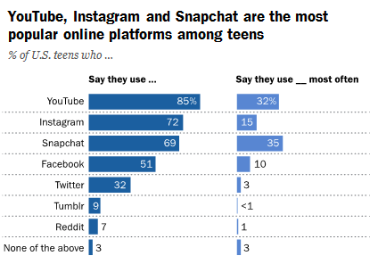 Number of Youtube viewers in The United States from
2018 to 2022.
In 2019, there were around 197 million American viewers on YouTube, with projections up to the 200s for 2022. As YouTube grows in popularity as a platform for content consumption, it is important for companies to be aware of this when designing content for their YouTube channels.

YouTube, Instagram and Snapchat are the most popular online platforms among teens. This graph to the right displays statistics showing that 85% of American teens say they use YouTube, with 32% naming it their most often used platform.

Important tips to keep in mind during video creation

1. Determine the goal of your video - what is the message you are trying to send?
2. Know your target audience, and understand the type of content they engage with
3. Create engaging content that targets a behavioural, cognitive and emotional response
4. Make an emotional connection with your audience
5. Encourage sharing across multiple social media platforms
6. Fully optimize your videos for SEO
7. Test and measure all your videos 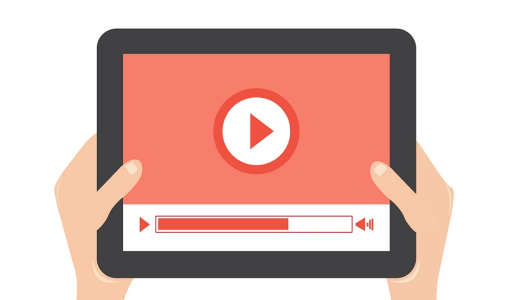